I know where Paradise is by Jeanette Winterson

I know where Paradise is. I live there. It is my stone cottage in a big garden. It is my garden that backs onto a wood. It is the owls, foxes, and deer that live here too. It is clean air and starry nights. It is the quiet that is not silence, because nature is alive all around me, the rustlings, chirpings, calls, twig crackle, tree creak, rainfall, the wind in the trees.

Paradise is the sun in outstretched wings over the top of those trees. It is the moon coming up between the trees until she clears the canopy and commands the sky.

At night, waking up, I see her, and the country road below, now a narrow stretch of unrolled silver. Deep black margins. And the stars flung in handfuls above me and the pond as mysterious as a disc of mercury, liquid, solid-seeming, reflecting the moon back to herself. Her nightly mirror.

Sometimes I go out for a walk in these unoccupied hours. There are no street lights. No cars. I am safe and free. At the top of the hill there may be a house illuminated far away. A night-worker, an insomniac, a parent comforting a child, someone afraid of the dark. Electricity has made the night unnatural, unnecessary. In the city there is no night, only artificial versions of day. Even after hours, the blue light of the screen accompanies our dreams. No matter what we do in the little space called home, the lights of others – the electric lights of others, are always there.

The super-rich can afford darkness; the private estate, the island retreat. Some of the poorest in the world have no choice but to live with it as they always did.

I am not rich but I have enough money for what I need. Paradise is knowing what you need, for the sake of body and soul, for the sake of mind and heart; knowing what you need, then finding it, then protecting it. When I protect my little patch of earth, I am protecting myself. Here are bees and butterflies and birds. There have been no chemicals here for 25 years. My soil is rich dark and nearly edible all on its own. It smells sweet. The food I grow is abundant and all waste is returned to the land. I grow in colour because nature is unfashionable and prefers a riot of green blue orange red yellow white. Bees love purple and so do I. I am a witch in a wood with the insect equivalent of a gingerbread house. I am a larder for life, and in return, life is a larder for me.

EAT ME! Is the Alice in Wonderland instruction written on everything that grows in my garden.

Yes, I am a writer, but I write with my feet, my legs, my liver, my blood supply, my working body that chops wood and digs the ground. I write with the whole of me and part of me is this place. Together we are in Tao.

Taoism is the art of being at one with nature. Human beings are bad at this. Unlike the go-get and the get-go of the West, the philosophy of the East is not about doing, but about being. Anyone who mediates knows how terrifying it is when the teacher says, “nothing to do, just to be”.

We have mistaken much of this philosophy for passivity – which is why we imagine that the princess in the tower in the fairy tale is ‘just’ waiting for her super-active prince to ride by. Mythically though, the ogre or wicked witch, has already violated the flow, or Tao, of life, by unnecessary aggressive action. This disruption has to be righted. The princess remains in Tao, just as Hermione and Paulina remain in Tao; in Shakespeare’s The Winter’s Tale, patiently blocking – and eventually redeeming – the murderous fallout of the jealous furious King Leontes.

The past looks better even when it was awful. It looks better because people talk about community and nature. People say, “we had nothing but we were happy”. 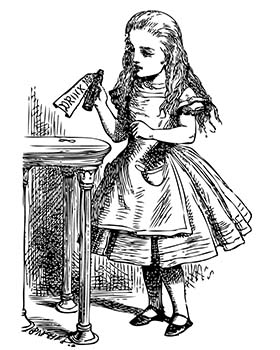 Paradise is an eastern concept. It isn’t Valhalla or Heaven. The earthly paradise was the Garden of Eden in Jewish and Christian myth. A garden is a mutually beneficial interaction between humans and nature. It is orderly and creative. The Fall is our exile from the garden. It is why, in Milton’s Paradise Lost, to be exiled is to live in the Palace of Pandemonium – many demons, much chaos. In Dante’s Divine Comedy, Paradise (para-dis) relocates to Satan’s city – City of Dis. The garden is gone.

We are haunted by loss. The past looks better even when it was awful. It looks better because people talk about community and nature. People say, “we had nothing but we were happy”.

Most people regret the loss of biodiversity on the planet. (A third of the world’s coral reefs are dead, 500 mammals have become extinct since 1900. A further 12,000 species are at risk.)

And this is the thing about Tao. In Tao, there is no need to actively protect the polar bear; all the polar bear needs is for humans not to violate the climate to such a degree that the polar ice melts. In other words – nature is self-regulating when left alone. She is in Tao. Humans are not self-regulating. We are meddlesome, interfering, hyper-active mammals who don’t have the good sense to lie under a tree and snooze it off when we have eaten our fill.

We never eat our fill because we are governed by greed.

Stop. That is the best advice.

We know that Planet Earth is a paradise in our solar system. Humans can live here – not because we are smart, but because the planet allows us to live here. Climate breakdown is changing that.

In an unregulated future, few of us will be able to live here, and only then in drastically reduced conditions. We are unable to share the planet with the other creatures whose home it is, constantly evicting and decimating. Jair Bolsonaro, President of Brazil, believes the Amazon rainforest is his to destroy. President Trump is an energetic supporter of the subsidised fossil fuel industry, and a climate change denier. In Australia, the political right aims to deflect focus away from climate issues and towards immigration.

Immigration: Which of us would want to risk our lives in an open boat looking for what? Not paradise. Dry land and a low paid job.

My country, the UK, had an empire. Immigration is the legacy of empire. We don’t talk about that. We don’t talk about the Iraq war that destabilised the Middle East. We talk as if everything is now – that there is no history, no consequences of history – just as we will talk about our loss of this beautiful planet as something that ‘happened’.

The Greeks had a different word – temenos. This is an enclosed space – maybe a sacred shrine, a grove, or a magic circle. 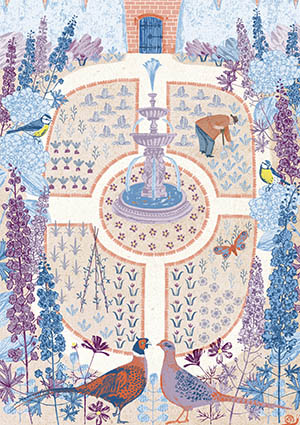 We throw up our hands in passive disbelief at the bad stuff – like the global financial crisis of 2008. We are like naughty children who insist ‘it wasn’t me’.

But if you make anything – and I make books, and I make a garden and I do both of these things every day – then you know it is you, that it is always you, both in the endeavour of making, and the ‘stand back and let it happen’ that is the strange secret of the creative process. It is also the truth of our interaction with nature; the moment when you have prepared the ground, planted and protected the crop, and now nature takes over. This is harmony. This is responsibility. This is Tao.

The Greeks had a different word – temenos. This is an enclosed space – maybe a sacred shrine, a grove, or a magic circle. Inside the temenos there is energetic and creative energy, things will happen, but nothing can be forced, there must be harmony and alignment. Alignment of inner and outer is the first rule of magic, and of religion, the first rule to observe, (note the verb – observe – not a crazy running around verb), and the rule whose violation brings about no end of trouble.

Vows and promises are non-physical temenos. We put ourselves inside a rule. The old monastic orders were called ‘rules’ for a reason. These aren’t laws, like gravity, or even the law of the land. They are voluntary restrictions or agreement of action. They are promises to ourselves as well as to others. There is a necessary discipline that humans need. We don’t talk about that either.

The earthly paradise in the east was raised on a triple terrace, so that even when the earth flooded – (see the story of Noah and his Ark) the deluge could not reach it.

During that flood Noah and his family were saved. The rest of humankind drowned in the rising water.

We know that story. This time it is called climate breakdown. The waters are rising. They will go on rising unless we cool our feverish planet. Who believes in Hellfire anymore? We all should. Look at California this year. Look at the cities in Europe that heated up past 40 degrees in August.

We are the generations who must act, and not act. Do more and do less. Every morning there is still time. For now.

I am lucky because I live in Paradise. Jeanette Winterson CBE was born in Manchester. Adopted by Pentecostal parents she was raised to be a missionary. This did and didn’t work out. Discovering early the power of books she left home at 16 to live in a Mini and get on with her education. After graduating from Oxford University she worked for a while in the theatre and published her first novel at 25. Oranges Are Not The Only Fruit is based on her own upbringing but using herself as a fictional character. She scripted the novel into a BAFTA winning BBC drama. Twenty seven years later she revisited that material in the bestselling memoir Why Be Happy When You Could Be Normal? She has written over 10 novels for adults, and her most recent work, Frankissstein was longlisted for the Booker Prize 2019. Jeanette has also written children’s books, non-fiction and screenplays. She is Professor of New Writing at the University of Manchester. Jeanette lives in the Cotswolds in a wood and in Spitalfields, London. She believes that art is for everyone and it is her mission to prove it.