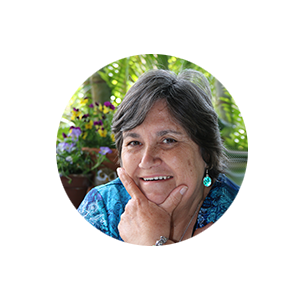 Colleen Wall, a Senior Woman from the Dauwa (String Bark) Clan of the Ka’bvai or Kabi (Bee) Nation is from the western Mary River catchment in South East Queensland. Her personal Murung is Marun - Sand Goanna.

Over 30 years working in Queensland’s Arts and Cultural industry working with First Nation Peoples and Government has focused Colleen’s work on protection and maintenance of First Nation culture. The interpretation of Aboriginal Land Law and its value of cultural balance between First Nation Grandmother’s Law and non-indigenous Law is essential to Colleen’s work. She paints stories relating to her country and utilises these stories and paintings to teach children and carers about their responsibilities within Grandmother’s Law.

Colleen has been working to build a network of Senior First Nation Women across Australia to allow a coordinated process for finding ‘right country for kids’ and ‘right family for kids’. This will go some way to reducing the over representation of First Nation children and youth in out-of-home care and reunify them with their family or kin thus delivering outcomes within ‘Closing the Gap’ and Queensland Government’s Changing Tracks Action Plan.

Colleen is currently the skills-based Elder in Residence at Queensland Performing Arts Centre and writing our First Nation’s Engagement Strategy and corresponding Protocols to protect cultural Intellectual property rights of First Nation performers, arts works and playwrights. Along with this, Colleen will develop a process for a permanent Elders Council to guide the Engagement Strategy for future generations to come.

Colleen’s Family is as follows:

In respect of Djuka (Land Law) Colleen ‘places’ herself by acknowledging that she is Colleen (Ma’run) Wall, a senior Dauwa woman from the Ka’bvai Nation. Daughter of Herb and Alfa Geiszler (nee Beezley) and granddaughter of Bert and Mary Beezley (nee Minniecon). Her mother’s grandmother is Katherine Minniecon (Tabby-Lingwoodock) daughter of Sarah Lloyd. Sarah’s mother is a traditional Dauwa Clan woman known only as Nannie of Munna (Blue Gum) and Wide Bay Creeks region of our Kau’vai Nation.

She respects that all First Nation’s peoples have Murung which carries a significant responsibility in our country. Colleen is Ma’run, the Burrowing Goanna; Her mum is Bair - King Parrot; her grandmother Mary is Muru Kutchi Kuilin - Black Swan; her great grandmother is Katherine is Go’alla Koala; her great-great grandmother Sarah is Undekal Mullet; and Sarah’s mother known as Nannie is Dauwa or Stringy Bark Tree.

Her family region extends from Maryborough, west to the Coastal Range below Biggenden then south to Goomeri’s Kinbombi Range and east to the coast below Noosa.

QPAC’s Vision of ‘a lifetime of unforgettable live performances for all Queenslanders’ will be enhanced through the following Values of its First Nation Peoples Engagement Strategy which are: Respect, Honesty, Integrity, Relationships, Protection and Accountability