25 years ago the Mabo Case rewrote Australian law and recognised the existence of native title.

Driven by a desire to honour the courage and significance of Edward Koiki Mabo’s work, in 2005 the Anti-Discrimination Commission Queensland (ADCQ) and QPAC partnered to establish The Mabo Oration – a biennial public oration from expert voices in the field of native title and Aboriginal and Torres Strait Islander cultures. Since then, six leaders from divergent fields have delivered orations on subjects ranging from the legal protection of cultural knowledge to meeting the contemporary challenges of social justice. 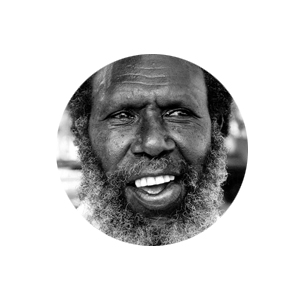 In 1982 Edward Koiki Mabo and four of his fellow Mer Islanders – David Passi, Celuia Mapoo Salee, Sam Passi and James Rice – began their legal claim in Australia’s High Court for ownership of lands on the island of Mer. Ten years later the High Court decided in their favour in what is known widely now as the Mabo Case. The legal doctrine of native title was a landmark moment, it changed the foundation of land law in Australia and the Native Title Act was introduced the following year.

Eddie Mabo began this journey through conversations. Conversations with his community, the family and the academic community where he challenged the notion of terra nullius in a way that brought voices of influence along the journey that ultimately saw the destruction of the myth of terra nullius, through the High Court Decision in Mabo Number 2.

Of course the High Court decision began another iteration of conversations. It provided a framework for Aboriginal and Torres Strait Islander Peoples to have further conversations about the impact of living in a country that did not recognise the oldest living culture, and custodians of the land that now is home to over 24 million people.

The Mabo Oration is an opportunity for ADCQ and QPAC to pay our tribute to Mr Eddie Mabo, a Torres Strait Island man whose achievements, some 25 years after the original decision in Mabo against Queensland, are still only beginning to be recognised.

Now, 25 years after the High Court decision, The Mabo Oration provides a continuing platform for all Australians to engage in a conversation that will challenge, and enlighten all of us who are descendants of those who have come by boats and planes or recent arrivals. Through conversations we can transform our relationships with our First Nation's Peoples.

“The principles established by Mabo represented the best opportunity for resolution of the Colonial grievance between Indigenous and non-Indigenous Australians”, and noted that he had often referred to Mabo as 'the once in a nation's lifetime opportunity'. He believes Mabo is our 'cornerstone for reconciliation.” Noel Pearson, The Mabo Oration 2005

“The Mabo Case and the legacy of Eddie Mabo himself remind us that there are times in our nation’s history where the tide turns and Australians begin to understand that the fates of Aboriginal and other Australians are tied.” Professor Larissa Behrendt, The Mabo Oration 2007

“And so, the overarching theme of this Oration is about self-evident truths in Aboriginal and Torres Strait Islander affairs. In particular, the need to build stronger relationships between Indigenous and non-Indigenous Australians that are based on honesty, acknowledgment and understanding.” Professor Tom Calma AO, The Mabo Oration 2009

“Eddie Mabo knew the importance of keeping culture alive, no matter where you lived, or how far you travelled from your island home. Indigenous peoples’ rights to land are inter-connected with the rights to stories, song, dance, resources, totems, and relationships of kin, associated with land.” Terri Janke, The Mabo Oration 2011

“The title of this oration – Corroboree – is to emphasise the First Peoples’ sustained institutions and systems for governance. These systems thrived for tens of thousands of years and still exist under the encumbrance of the Australian State. Our goal to survive as Indigenous peoples – custodians with inherent obligations to the natural and spiritual environment – is a legitimate one.” Les Malezer, The Mabo Oration 2013 Kevin Cocks AM, a highly respected human rights and disabilities advocate, commenced his appointment as Queensland’s Anti-Discrimination Commissioner in February 2011. Kevin holds a Masters of Social Welfare, Administration & Planning from the University of Queensland and has received the following Community Recognition awards: Awarded an AM in 2010 for the promotion of Human Rights for people with disability in Australia; Awarded Australian Human Rights Medal 2005; Human Rights and Equal Opportunities Commission (HREOC); Awarded Centenary Medal ‘for distinguished service to disability services in Queensland’ in 2003; and the QUT award ‘the Humanities and Human Services Outstanding Alumni Award’ for 2003, which recognises the contribution of exceptional professional achievement and contribution to the community at Local, State, National and International level.